Co-operation among co-operatives is the sixth of seven principles which help co-operatives put their values into practice. They can be followed by any community minded organisation, whether they are formally a co-op or not.

Put Principle 6 into action and join us for a meeting and social get together between 6-9pm on Wednesday 6th June in the cafe of the Brighthelm Centre, North Road, Brighton, BN1 1YD. Free food will be provided.

The event is FREE but please register via eventbrite so we can keep track of numbers.

Co-ops South East have teamed up with Mutual Aid In Sussex (MAIS) to organise this event. 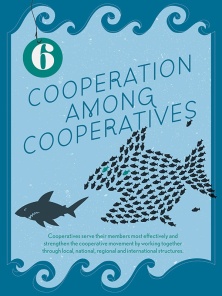 There will be a chance to introduce yourself, your project or business and ask for any advice or support you might want from others, as well as see where you can help others out. Anything can be asked for – whether it’s a computer, the number of a good plumber, advice on taxes or anything else.

We will also hear briefly about the results of the MAIS/Co-ops South East survey, including what support co-ops and community organisations want as well as initial ideas of future training we will help organise based on the survey. If you haven’t filled in the survey yet, please do so here – it’s just 10 questions.

There will also be time for getting to know each other and some of us will be heading to the pub afterwards to carry on the conversations.

How to set up a housing co-op – free workshop

We are working with Brighton & Hove Community Land Trust (BHCLT) to organise a workshop on how to set up a housing co-operative.

Housing co-operatives are one of many ways to create more genuinely affordable and secure housing in the city.

Helen Bartlett from Rosa Bridge housing co-op will be talking her experiences in setting it up on Thursday 17 May from 6:30PM in the Hanover room in the Brighthelm Centre, North Road, Brighton, BN1 1YD. (map here)

There will be time for both a brief introduction to housing co-ops as well as more in-depth advice on how to set them up, based on the experiences of Rosa Bridge. Space will be given for questions and getting to know others.

There are limited places available. Please email admin[at]bhclt.org.uk as soon as possible to find out more and sign up.

Rosa Bridge is a small, queer, feminist co-op of five members, set up in 2014 with the help of a grant from the DCLG’s Empty Homes Programme. It is part of an old dairy in the Tarner area of Brighton.

Rosa Bridge aimed to take housing, especially in the city centre, away from private ownership and to be part of creating different alternatives to notions of ‘home’.

What is a housing co-op?

A brief introduction video to what is a housing co-op is below (focused on student housing co-ops, but relevant to all housing co-ops). Housing co-ops don’t have to be for students – there are several which already exist in Brighton & Hove for people of all ages, including Rosa Bridge housing co-op.

Co-operatives South East and Mutual Aid In Sussex (MAIS) are working together to survey co-operatives of all kinds between Worthing and Eastbourne (anyone within the BN postcode area) to find out where we can be the most useful and where there is most enthusiasm to build the co-operative movement in the area.

We would like as many co-op members as possible to fill it out, so please pass the survey on to all the members of your co-op.

Fill in the survey here

We are planning a joint meetup/social with Co-ops South East on the evening of Wednesday 6 June in Brighton. More information on that to come but save the date!

MAIS and Co-ops South East are meeting together on Wednesday 28 March at 7pm at on Blackman St (just off Trafalgar St).

We are working with Co-ops South East to survey co-ops in the city about the kinds of things they would want to get involved in and to try and strengthen both our networks.

We are planning organise some events and training throughout 2018, including regular meet ups to try and encourage mutual aid between those who want to live and/or work cooperatively in Brighton & Hove and so we can get to know each other better.

Please come along if you want to get more involved with organising.

Email mais@riseup.net if you are coming so we can give you info on getting into the building.

The Brighton & Hove Community-Led Housing Programme was launched on Wednesday 21 February and there are now videos from the event on the Brighton & Hove Community Land Trust website, including the full talks from Stephen Hill, Director at C2O futureplanners and a key player in community-led housing nationally; and Martyn Holmes of Brighton’s Bunker Self-Build Housing Co-op.

Here is a teaser:

The Programme is running a series of workshops for community-led housing groups throughout the year, with a focus on practical knowledge and skills.

To be kept up to date with similar workshops and events in the future, join the BHCLT mailing list here.

Find out more at: bhclt.org.uk

Community solutions to the housing crisis

Community-led housing is a way to create more genuinely affordable and secure homes, allowing local people to create alternatives that are community focused and take power back from the hands of developers, letting agencies and a housing market that is out of control.

There will be a free launch event at the Brighthelm Centre on Wednesday 21 February. Reserve your place here at Eventbrite.

At the FREE launch event there will be the opportunity to:

The event will take place on Wednesday 21 February, 5.30-9.00pm (Registration from 5:15pm) in the Auditorium, Brighthelm Centre, North Road, Brighton, East Sussex BN1 1YD. Food will be provided at the start of the event.

Reserve your place here at Eventbrite

Find out more about the Community-Led Housing Programme, and what support is available here at the CLT website.

Open day: What is it like to live in a housing co-operative?

Join us on Saturday 15 July for an open day of six housing co-operatives in Brighton & Hove, each with its own story. This is a chance to see some of the ways more genuinely affordable housing has been created in the city.

Please turn up at any of the houses at 1pm, 2.30pm and 4pm (Rosa Bridge is just 1pm) for the tour of the house/flat, kindly offered by one of the residents who can answer questions and give an overview of the co-operative’s history.

Members of MAIS will be at Coachwerks in Hollingdean between 12.30pm and 6pm to answer any questions and provide information. Drop in for a drink and a chat. More on Coachwerks here: http://coachwerks.org/

Two Piers is a permanent ownership housing co-operative, Brighton’s largest housing co-op. It provides affordable housing for 68 single people, including parents, in shared and self-contained flats and houses in several locations across the city.

The Christchurch flats are very central, close to Western Road. There are eleven flats, of various sizes, in two blocks facing each other across a small paved garden, which boasts a fishpond and lovely pergola.

Christchurch is on the site of an old church which was demolished. The Two Piers build started in 1985 and tenants moved in two years later. The housing was designed by Michael Blee, who closely followed the Co-op’s brief of providing a highly communal building, basing his ideas on rural villages in India and Mexico.

There is a ‘gazebo’ in the garden, used for meetings, band practice, children’s parties, meditation, and which currently houses the co-op’s archives and library.

There will be a sign on the door of Christchurch so you can contact the resident who will show you around her flat. The flat is accessible on ground floor but there are stairs to the toilet. Neighbours with no stairs can let people use their toilet if needs be.

Bug Housing Co-operative was formed in 2005. It is situated in Higher Bevendean and currently house six members as well as the resident cat Jasper.

Bug is a fully mutual co-op which means that all decisions are made by members, generally at monthly meetings. Each member has their own co-op role(s), these may be taken on as an individual, shared or swapped by general agreement. The roles are treasurer, secretary, maintenance, garden, allocations, household and development.

Living within a co-op provides individuals with both affordable and secure housing. Bug believes in creating a supportive environment for all members in order for both members and “the co-op” (as a home, house and business) to thrive. When a vacancy arises they send an advert out through both the CHIBAH and Permaculture networks. Applicants that meet the criteria are invited to interview and successful applicants are taken on with a three month probationary period before becoming full members.

Unfortunately access to Bug is impossible to anyone in a wheelchair; they are situated up a hill, with a small mulch slope and four steps to access the front door.

More info: Get in touch at bugcoopbrighton@gmail.com

Out of Town (Fiveways)

Out of Town housing co-op owns two properties housing 17 people (plus various dogs, cats and chickens). They have owned one house for eight years and the other was bought more recently to rehouse members from two properties which had to be handed back to the council after the end of a ten year lease.

Out of Town is a member of Radical Routes, which is a mutual aid network of radical co-ops whose members are committed to working for positive social change.

The four founder members set up Hornbeam housing co-operative in 2011. They had been renting together for many years and dealing with all the insecurities that come with it before deciding to set up a housing co-op. As well as the insecurity of renting they set up Hornbeam to move away from property ownership, whilst still allowing people to be in control of their housing, giving people on a low income a stable place to live. The rent, which is well below market value, has also enabled members to move towards a more healthy work/life balance.

Hornbeam wants to show people that it is possible to live another way, believing that living communally is not only better for people but also the environment. They managed to secure a grant from the Government’s Empty Homes scheme and bought a property in Bevendean in early 2013.

The members did a lot of work and renovation on the property and Hornbeam is now a six member house, continuing to develop the property in the most sustainable way possible. There has only been a few changes in membership over the last few years but those who have left are still friends of the co-op and last year a baby arrived which has been fantastic. Hornbeam’s ethos of mutual aid and cooperation continues.

Rosa Bridge is a small, queer, feminist co-op of five members, set up in 2014 with the help of a grant from the DCLG’s Empty Homes Programme. It is part of an old dairy in the Tarner area of Brighton.

Rosa Bridge aimed to take housing, especially in the city centre, away from private ownership and to be part of creating different alternatives to notions of ‘home’.

The house is up a steep hill, 10/15 minutes up or down a hill to bus stops and shops. There are three shallow but awkward steps to get into the house, and doorways are slim. All the communal areas are across the ground floor and there are no steps in the ground floor.

Brighton Rock Housing Co-operative consists of three terraced houses with four inhabitants living in each house, the gardens are joined at the rear and are communal.

The houses have limited access for wheelchairs due to the width of doorways.