On 11th June 2016 Mutual Aid in Sussex (in collaboration with Free University of Brighton) hosted a day long event called Co-operative Alternatives, with eight separate workshops (plus two plenary sessions) and a number of stalls promoting local and national co-operative projects. The full schedule of the event can be found here. The powerpoints of those who used them on the day can be found below: 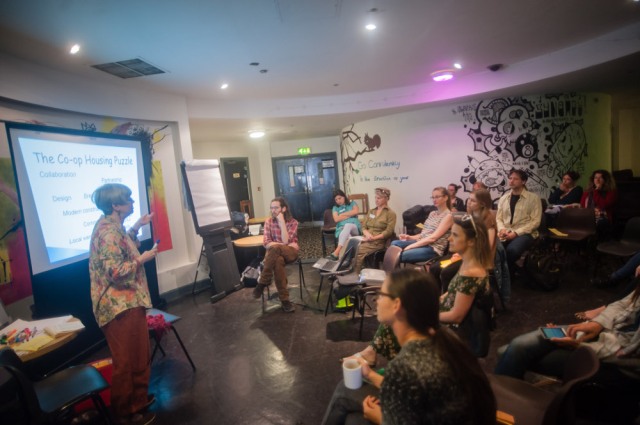 Helen Russell (Co-operative Housing in Brighton & Hove) giving workshop on How to set up a housing co-op (see her full powerpoint above). Photo by Adi loosli.

In total, we had 96 people attend the event (plus about a dozen or so organisers and people helping out on the day).

Feedback from people attending was hugely positive, such as:

Once again, a big thank you for organising the co-operative alternatives event. I learnt an awful lot about the roots of the co-operative ethos & feel very inspired in regards to developing our values after Mike’s presentation plus some good pointers for conflict. I feel very proud to be a part of the co-operative movement. I am definitely up for being involved with MAIS on more events like this and hope to see you all again at meetings soon. – Polly from Kindlings Outdoor Play And Education Workers’ Co-operative

Thanks again for putting on the event – as I said on the day I’ve been really wanting to be a part of something and to connect with people already doing brilliant co-operative things down here, so it was much appreciated! – Sarah Owen

We feel we have both helped many people in their own projects, and also strengthened the mutual aid network in the area.

As a result of the day we have already had people interested in starting up new co-operatives, offering to host smaller events and to get more involved in helping run MAIS, and we’ve had numerous people telling us that the event was directly beneficial to them and their co-op.

The day was a huge success promoting co-ops and strengthening the co-operative network in Sussex. 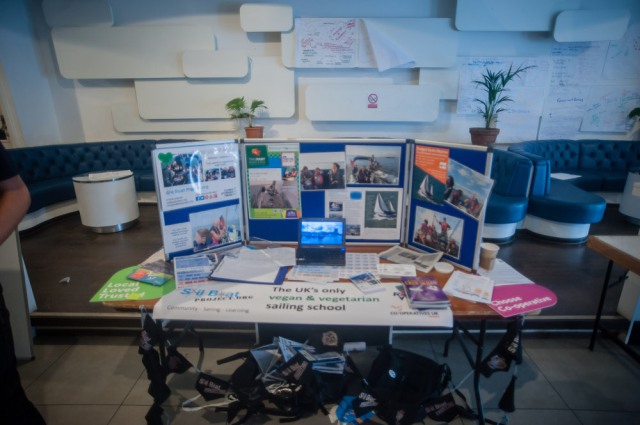 One of several stalls at the event. This one was for the Sail Boat project – a workers’ co-operative. Photo by Adi loosli.

This entry was posted in Uncategorized. Bookmark the permalink.